Welcome to the EU Alumni newsletter!

Welcome to the EU Alumni newsletter!

I hope this bi-monthly newsletter will serve as a valuable platform to keep our ever-expanding group of alumni well connected and informed about the EU activities. It will be your window into all the work the EU is doing in India under the EU-India partnership.

As you well know, this year was marked by the 60th anniversary of relations between the EU and India, two large economies with vibrant democracies that support wholeheartedly the rules-based international order, in a global challenging landscape. Today, our relationship is more important than ever, and as the President von der Leyen said, “For the European Union, the partnership with India is one of our most important relationships for the coming decade and strengthening this partnership is a priority”.

Our alumni network is a critical feature of the EU-India relationship. As you know our alumni numbers have been steadily growing by 10 to 15% annually. Under the EU flagship programme Erasmus+, over 6000 Indian students have studied in Europe in the last decade. In 2022, 161 Indian students were awarded this prestigious scholarship. With this, India ranks first for the second consecutive year among 167 participating countries.

Our alumni are spread across the length and breadth of this beautiful and vast country. It is therefore not always possible to stay in touch as much as we would like to. However, this newsletter will help us close this gap and be in touch with you more regularly.

As we stand at end of 2022, I wish you all happy holidays. May the New Year usher new hopes and opportunities for all of you. Happy 2023! 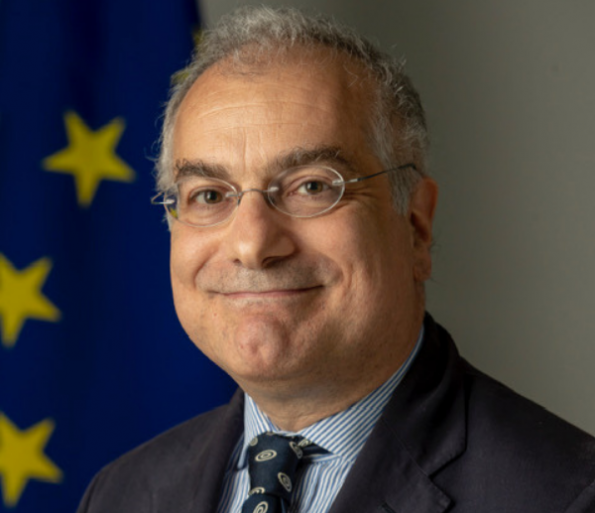 Ugo Astuto
Ambassador of the European Union to India and Bhutan 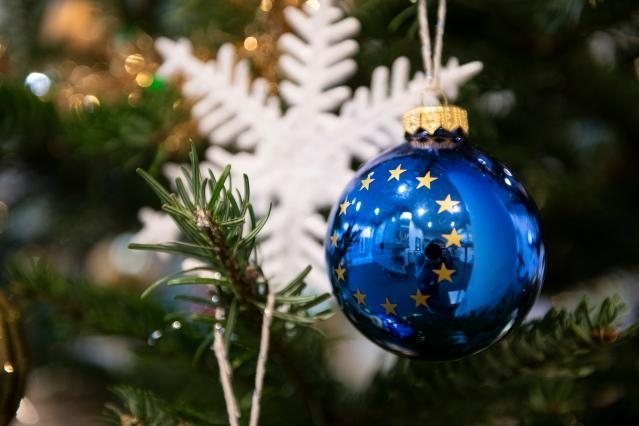 A partnership shaped by students and academia

The seventh edition of the European Higher Education Virtual Fair 2022 was held from 21 to 25 November 2022. It brought together over 100 world-class higher education institutions from 25 EU member states to share with Indian students’ information, advice and guidance on how to Study in Europe.

The next edition will happen around the same dates in 2023, so visit this space for more information! And do help us spread the word.

“Cycling for Future” is an initiative organised by the EU Delegation and the diplomatic representations of Denmark, Germany, the Netherlands, Slovenia, and Ukraine in the context of the EU Climate Diplomacy weeks. Over 500 Delhiites got reunited to pedal down the roads of New Delhi on a Saturday morning.

Cycling is a European tradition that is being renewed today, with the commitment of its citizens of all ages with the environment. In 2019, around 20 million units of regular bicycles and e-bikes were sold in the EU and the Netherlands, Denmark and Germany rank as the top 3 countries in the world with the most bicycles per capita.

The movement towards an eco-friendlier city is growing in New Delhi and events of this nature continue to attract more participants. Mark your calendar and don’t forget to join us in future initiatives if you want to make a difference and have some fun along the way. 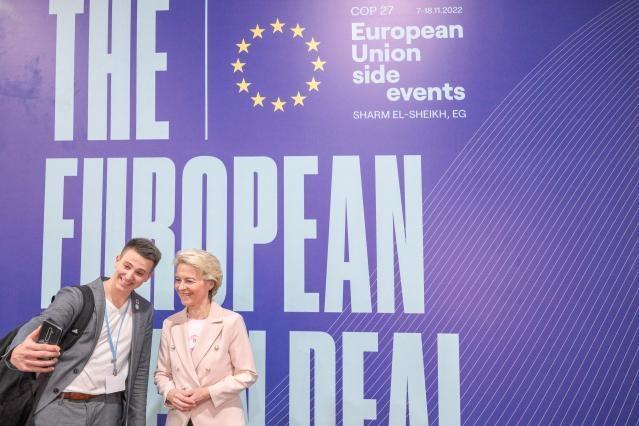 The 27th UN Climate Change Conference (COP27) took place from 6 to 20 November 2022 in Sharm El-Sheikh, Egypt. The COP27 summit brought parties together to accelerate action towards the goals of the Paris Agreement and the UN Framework Convention on Climate Change.

On mitigation, Parties agreed that limiting global warming to 1.5C requires rapid, deep and sustained reductions in global greenhouse gas emissions, reducing them by 43 percent by 2030 relative to the 2019 level. They also recognised that this requires accelerated action in this critical decade, and reiterated the call from the Glasgow Climate Pact for nationally determined contributions (NDCs) to be updated as necessary to align with the Paris Agreement temperature goal, by the end of 2023. They also affirmed that the Glasgow Climate Pact will guide a new Mitigation Work Programme to encourage Parties to align their targets and actions towards net zero.

On loss and damage, the Parties decided to establish new funding arrangements for assisting developing countries that are particularly vulnerable to the adverse effects of climate change. This includes a new fund with a focus on addressing loss and damage, to be established by a transitional committee which would also look into expanding sources of funding.

The COP27 outcomes complement many bilateral and multilateral agreements secured by the European Commission at COP27. European Commission President von der Leyen participated in the Leaders' Summit at the beginning of COP27 and signed Partnerships with Kazakhstan on raw materials, batteries and renewable hydrogen and with Namibia on sustainable raw materials and renewable hydrogen, and announced with Egyptian president El-Sisi a Strategic Partnership on Renewable Hydrogen, which was signed by Executive Vice-President Timmermans and Commissioner Kadri Simson. President von der Leyen also launched Forest and Climate Partnerships with Congo, Guyana, Mongolia, Zambia and Uganda.

Throughout the conference, the European Commission hosted over 125 side events at the EU Pavilion in Sharm el-Sheikh and online on issues such as biodiversity protection and nature restoration, energy security and the green transition, sustainable finance, food and water security, and research and innovation. These included a passionate dialogue between Executive Vice-President Timmermans and youth representatives from around the world.

Under the 2015 Paris Agreement, 194 countries agreed to submit Nationally Determined Contributions (NDCs) which represent their individual emissions reduction targets. Collectively, these NDCs should contribute to keeping average global temperature change below 2°C and as close as possible to 1.5°C by the end of the century. The 2022 reports from the UN's Intergovernmental Panel on Climate Change (IPCC) warned that the world is set to reach the 1.5ºC level within the next two decades and that only the most drastic cuts in carbon emissions would help prevent an environmental disaster. This level of temperature rise would have extremely harmful effects that pose an existential challenge. The European Union is a global leader in climate action, having already cut its greenhouse gas emissions by over a quarter since 1990, while growing its economy by over 60%. With the European Green Deal presented in December 2019, the EU further raised its climate ambition by committing to reaching climate neutrality by 2050. This objective became legally binding with the adoption and entry into force of the European Climate Law, in July 2021. The Climate Law also sets an intermediate target of reducing net greenhouse gas emissions by at least 55% by 2030, compared to 1990 levels. This 2030 target was communicated to the UNFCCC in December 2020 as the EU's NDC under the Paris Agreement. In 2021, the EU presented a package of proposals to make its climate, energy, land use, transport and taxation policies fit for reducing net greenhouse gas emissions by at least 55% by 2030. The EU will update its NDC, as appropriate, as soon as possible after all these proposals are adopted.

Climate finance is critical to support vulnerable communities to protect themselves against the impacts of climate change and to support sustainable economic growth. Developed countries have committed to mobilise a total of $100 billion of international climate finance per year from 2020 until 2025 to help the most vulnerable countries and small island states in particular, in their mitigation and adaptation efforts. The EU is the biggest donor representing around a quarter of the target.

Statement in the closing plenary session by Executive Vice-President for the European Green Deal, Frans Timmermans

EU at COP27 Side Events Programme

The European Union Film Festival – India is an annual event celebrating the diversity and depth of European cinema and culture. The 27th edition of the festival celebrated the return to the in-theatre experience after two years of the pandemic while retaining its virtual avatar. EU Delegation along with all 27 member states held the on-ground festival from 4 to 13 November followed by a month-long virtual festival from 15 November to 15 December.

The festival featured outstanding, award-winning films from all 27 European Union countries, celebrating the most recent cinematic triumphs at Cannes, Tribeca, Tallinn, Venice, Berlin and San Sebastian, amongst others. Highlighting individual stories yet reflecting universal experiences, the films offer a ‘Window to Europe’ and demonstrate the power of cinema to transcend boundaries and create shared experiences.

This year marks 60 years of diplomatic ties between EU and India. To celebrate this milestone, the festival featured a specially curated section: India @ European Film Festivals. With a fine line-up of films that have received accolades and mesmerised audience around the world, the festival offers viewers an insight into the artistic underpinnings of Indian filmmaking. Given the immediacy of the climate emergency, the festival also featured unique stories of ecological awareness, the challenges and unique tales of combating them as we celebrate the planet, we call home.

The EU welcomes think tanks, universities, political foundations and research institutes from India and the EU to participate in the Joint Online Research Collaboration under the EU India Think Tanks Twinning Initiative 2022 – 2023.

Applicants should draft a research proposal on the topics below: 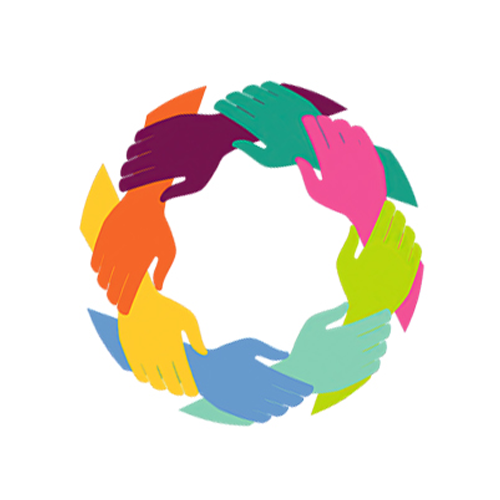 For more details please visit: https://euindiathinktanks.in/ and for queries, please write to us at eupop@altairasesores.es.

Samvad – a Dialogue, a cultural evening to mark 60 years of EU-India Diplomatic Relations

To mark 60 years of the EU-India diplomatic relations, the EU Delegation to India organized a concert titled “Samvad – a Dialogue” conceptualised and curated by the international musician couple Pandit Shubhendra Rao (protégé of Pt Ravi Shankar) and Maestro Saskia Rao – De Haas, whom themselves exemplify this cross-cultural exchange.

Using the universal language of music and dance to bring people together and foster understanding, respect, appreciation and love for different cultures. “Samvad – Dialogue” celebrates two cultures as well as the inter-cultural exchange between the EU and India.

Get to meet the European Union Prize for Literature shortlisted authors 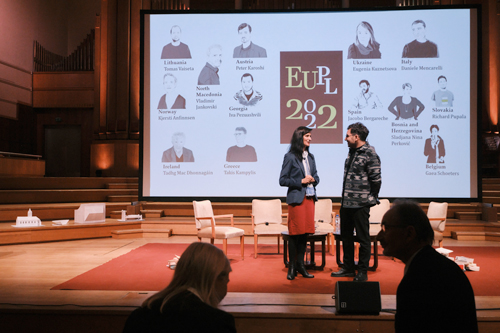 The European Union Prize for Literature (EUPL) is an annual initiative recognising the best emerging fiction writers in Europe. Its aim is to put the spotlight on the creativity and diverse wealth of Europe´s contemporary literature in the field of fiction and encourage greater interest in non-national literary works. The Prize competition is open to 41 countries.

Catch two of the five authors, who received special mention this year at the upcoming edition of the Jaipur Literature Festival, Tadhg Mac Dhonnagáin and Eugenia Kuznetsova.

Tadhg Mac Dhonnagáin, from Ireland, was shortlisted for his book “Madame Lazare” and will attend the Jaipur Literature Festival from 19-23 January 2023 and will be speaking at a session on 19 January. While Eugenia Kuznetsoav, from Ukraine, was shortlisted for her book ‘Ask Miechka’ and she will join remotely for the session.

For those who are unable to make it to Jaipur and are interested to attend in New Delhi, will have the chance to meet Tadhg Mac Dhonnagáin on 17 January 2023, in an event organised by the EU Delegation in partnership with the India Habitat Centre.

For session details and festival program visit: https://jaipurliteraturefestival.org/ and https://www.indiahabitat.org/programmes 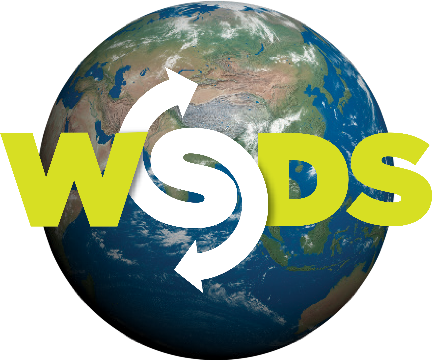 EU Goes to School Initiative: A wall mural “Biodiversity: It’s in My Nature” As part of the EU Goes to School initiative, an art competition organised across Delhi schools, a special workshop was conducted by the Delhi Street Art artists to train selected teams from five schools on wall art painting techniques. The final mural titled “Biodiversity: It’s in my nature” was an outcome of a six-month-long process. Watching the talented young artists participating in this immersive process and bringing their idea to life was a sight to be watched.

Under the year-long celebration of 60 years of EU-India diplomatic relationship and in keeping with EU key priorities, this art project was designed to encourage the school kids to express their thoughts on biodiversity and climate change using the visual arts. 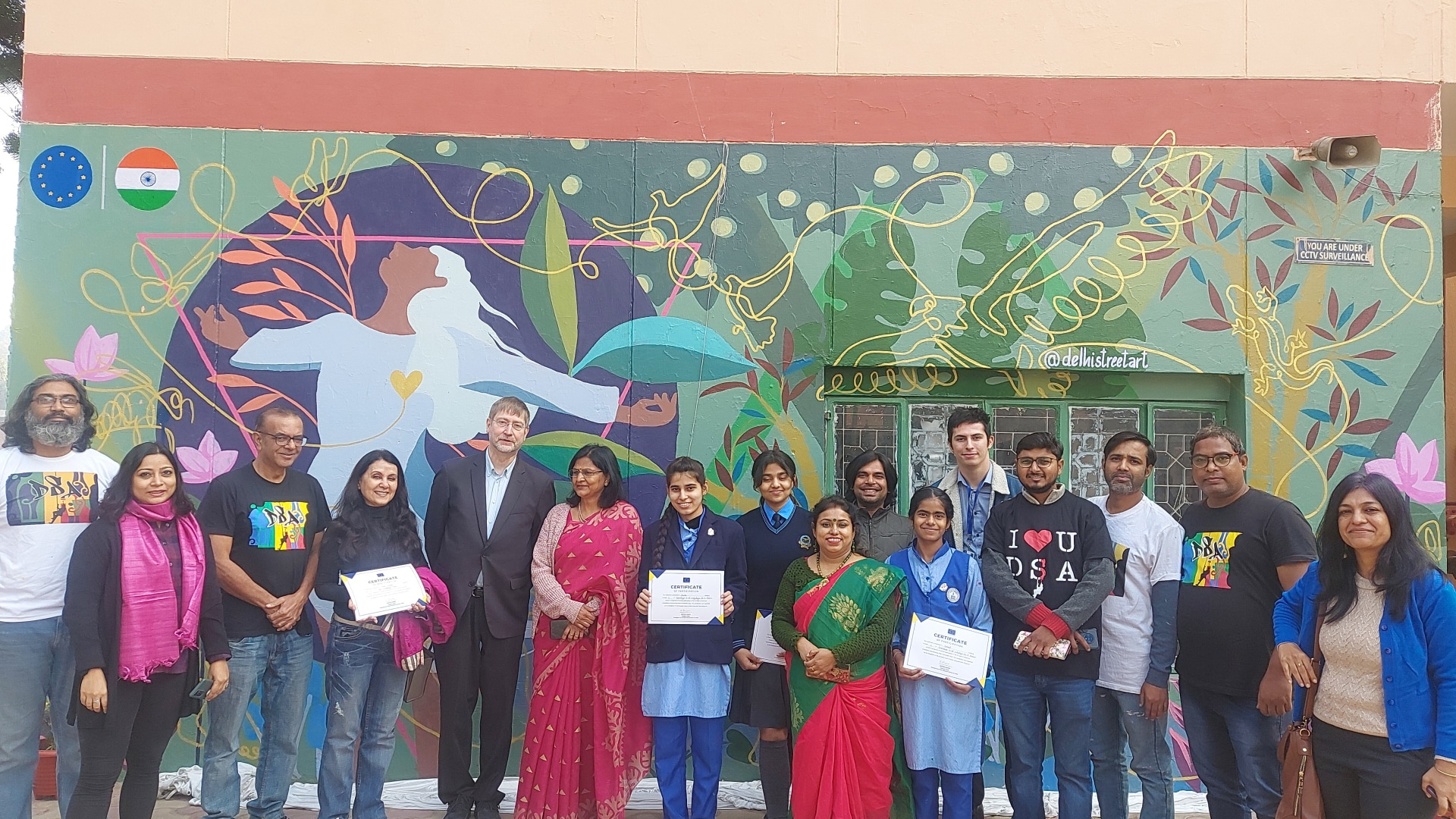